Adopted at the meeting of the Council of the Socialist International, Geneva 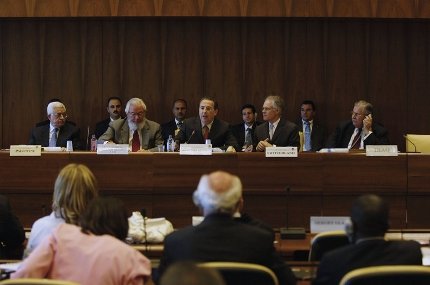 1. Since globalisation is here to stay, it is necessary to establish progressive guidelines that will make possible to have a sustainable society, not only at the national level, but also at the world level.

2. There are a growing number of international issues that cannot be solved at the national level. Migration, international trade and internet financial flows, maintenance of a world peace, pandemias that cross national borders, international terrorism, climate change are just a few examples of the need to solve these problems.

3. With regard to climate change, the time for a diagnosis is over now that scientific knowledge has established that climate change and global warming have been the effect of the industrial revolution and the work of human beings. Climate change is the greatest challenge of our time. The danger zone is not something that lies in the future. We are in it now.

4. The security threat produced by climate change needs a multilateral response and should be handled within the context of the UN reform. Therefore, the SI welcomes the decision of the G8 + 5 taken to begin negotiations for the post-Kyoto 2012 protocol in Bali by the end of 2007.

5. The new agreement has to take into consideration the principles of the Covenant with regard to equity, responsibility, capability and the necessary financial transference to make possible new and sustainable sources of energy in developing countries.

6. Taking into consideration the above mentioned principles, the new protocol should consider caps on emissions to all countries with special provisions not to prevent developing countries to continue its efforts for a better economic growth rate.

7. It is our task, in the SI family, to take the lead in global cooperation to tackle climate change. It is our task because we believe in multilateralism and in the power of politics. It is our task because we know that the fight against climate change must build on the principles of equality and fair distribution, between people and between countries. No other political force can do that. These are the reasons to create a Commission for a Sustainable World Society chaired by Ricardo Lagos and Goran Persson.

8. The Commission should work in a decentralised manner, through regional conferences and through gathering examples of best practices. Its reflections will include the consideration of different regulatory instruments on pollution emissions that could be put in place on a worldwide scale, among them a global tax on CO2 emissions.