SI Committee for the CIS, the Caucasus and the Black Sea focuses on key regional issues at virtual meeting 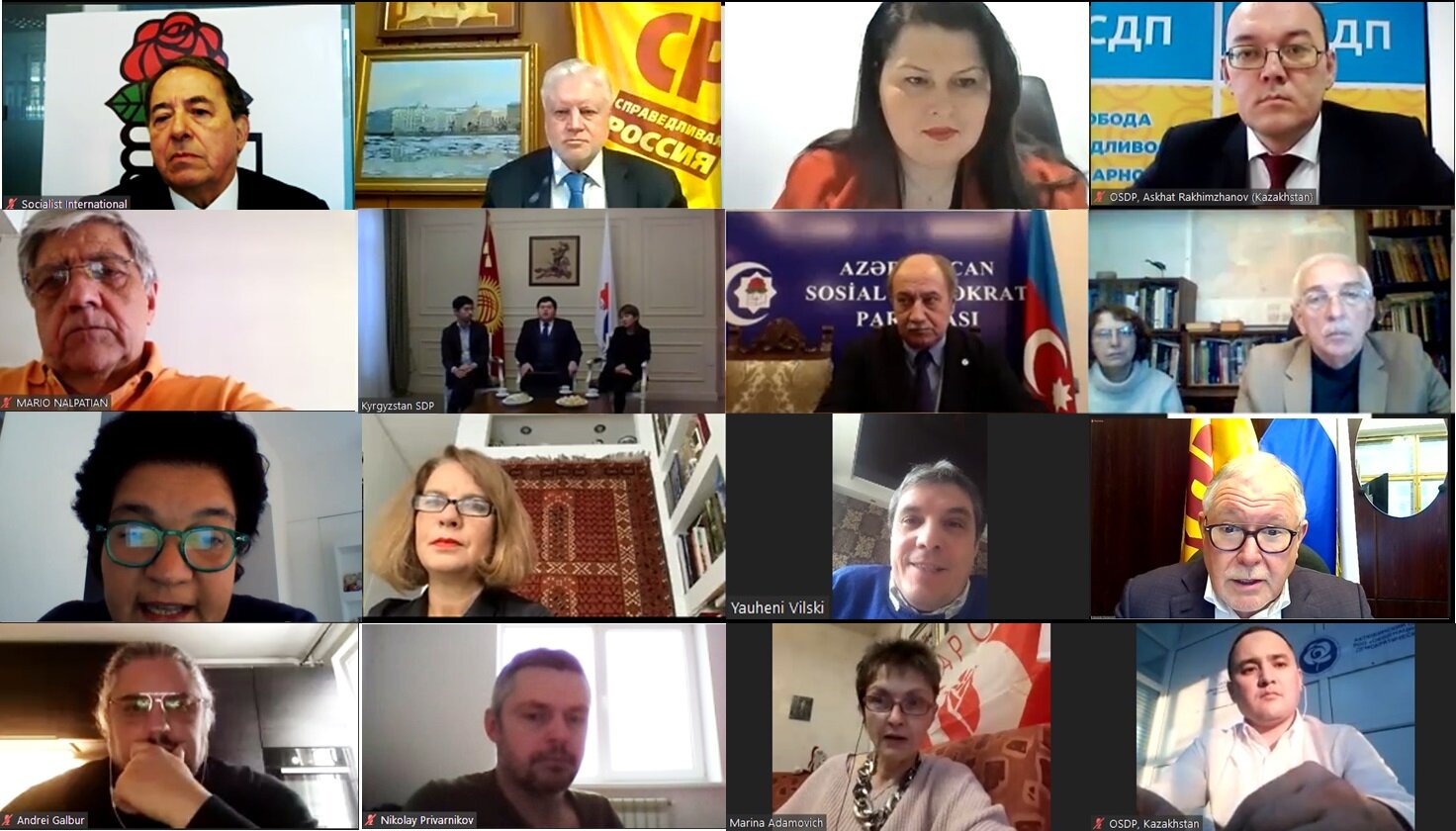 The Socialist International Committee for the CIS, the Caucasus and the Black Sea held an online meeting on Saturday 5 December 2020, with the participation of member parties from countries across the region. The agenda of the meeting comprised of three main themes, beginning with a presentation of reports on the national situations of member parties, with particular attention given to the impact of Covid-19. The meeting continued with exchanges on the resolution of conflicts and securing peace, followed by contributions on defending and strengthening democracy and its institutions in the countries of the CIS, Caucasus and Black Sea region.

The committee heard accounts of how the pandemic had affected participants, with a number of them having personally suffered from the disease. The diverse approaches taken by countries in the region had significantly affected the spread of the virus and its impact on the population, with countries affected in different ways during the early months of the pandemic and at the present time. Social democratic priorities for the response to the pandemic, such as access to healthcare, mobilisation of resources to relieve economic hardship and the question of equitable access to vaccines were among the key issues raised during the exchanges.

Sergey Mironov, chair of A Just Russia Party, reported that the situation in Russia remained complex as the country was confronting the second wave without any lockdowns. The pandemic had brought long-term unemployment and social issues, but there was renewed hope due to the imminent start of mass vaccinations with the Sputnik V vaccine which,Mironov underlined, Russia was prepared to share. The virus had touched upon all of humanity but he was confident that it could be overcome by countries working together. His party always supported international relationships and he described the SI as a strong ideological community, expressing confidence that its words would be heard, presenting a common point of view that was particularly needed at the time of the pandemic.

Moldova was facing a state of emergency due to daily increases in the number of cases of Covid-19 in the country. Cristina Lesnic, member of the Executive Bureau of the PDM, underlined the importance of placing the citizens at the centre of the pandemic response and the need for access to medicines and a strengthened medical system. The PDM was working for the implementation of its plan to deal with the pandemic and its impact. Access to proper medical treatment is also a serious problem for Kyrgyzstan, which had not been able to effectively deal with the pandemic, as the former president had not found sufficient funds to enable access to free medical help for citizens or for the establishment of corona hospitals to take care of sick patients, resulting in a disproportionately high death toll. Askhat Rakhimzhanov, chair of the OSDP, Kazakhstan, reported that Kazakhstan had not been spared the suffering caused by the pandemic and strict measures including a lockdown and state of emergency had been introduced. He considered that lessons had been learned from the first wave that meant the country was better prepared for the second.

In contrast, a number of participants reported that the second wave had been more severe than during the spring, among them Gia Jorjoliani, chair of the SDD, Georgia, who considered that the pandemic was exposing serious shortcomings in the ability of the world order to respond to such a crisis. Georgia had coped very well in the spring with a two-month lockdown, but was now among the least successful countries. Another country heavily hit by the second wave was Hungary, as reported by Alexandra Dobolyi, co-chair of the committee, MSzP, where the government was not managing to balance the economy against the consequences of not locking down.

The dangerous lack of response by the Lukashenko regime in Belarus was brought to the attention of the meeting by Yauheni Vilski, first vice-chair of NH, Belarus, who described an administration that considered loyalty more important than health, which meant that anyone who publicly went against government policy would lose their job. The regime had chosen to deny the existence of the pandemic, despite hospitals in Minsk now dealing exclusively with Covid-19 patients.

On the theme of peace and conflict resolution, significant attention was given to the recent conflict in the South Caucasus, and the meeting listened to the perspectives of participants from both Armenia and Azerbaijan on this subject.

Araz Alizadeh, co-chair of the committee and leader of the SDPA, Azerbaijan, described the conflict as a patriotic war which all Azeri political parties had supported, resulting in Armenian forces leaving territory they had occupied for the first time since 1993. Responding to reports of Turkish involvement in the war, he denied the presence of Turkish armed forces in Azerbaijan.  His position was that Azerbaijan had not at any point attacked Armenian territory, while Armenia had attacked Ganja to breach the ceasefire of 10 October, a city outside of the Karabakh region. His position was that the SDPA did not want war, regardless of demands from Yerevan and that a bad peace was better than a 'good' war.

Shaghig Maroukhian, supreme council member of the ARF, Armenia, described the actions of Azerbaijan as a large scale aggression in violation of the tripartite ceasefire that was planned and coordinated with military and political support from Turkey. She accused the government of Azerbaijan of recruiting terrorist mercenaries from Syria and Libya, and of immediately violating two ceasefires agreed during October. The ARF called into question the 10 November ceasefire agreement and supported protests against the Armenian prime minister and the installation of an interim government. Mario Nalpatian (ARF, SI vice-president) considered that a just peace had not been reached, but outlined his party's commitment to the values and principles of the SI and readiness to work for this in the South Caucasus.

In remarks on the resolution of conflicts, SI vice-president Alexander Romanovich (Just Russia) highlighted the personal role of the leaders of Armenia, Azerbaijan and Russia in reaching a ceasefire agreement. He regretted the number of on-going conflicts in the CIS, referring to the situations in Moldova and Ukraine, and expressed his belief that conflicts could only be solved through negotiations with international support from the UN.

On the subject of the conflict affecting Transnistria, Cristina Lesnic outlined that despite a difficult year, the PDM was still focused on a result-oriented approach. She described the isolation of the Transnistria region through the introduction of checkpoints and violations of human rights as unsustainable, calling for a negotiated solution with respect for the integrity of Moldova, human rights and security.

Discussions on democracy took into account the developments since the fraudulent presidential elections in Belarus, which have been rejected by the SI and other international organisations. Marina Adamovich (NH, Belarus) reminded participants that 189 days had passed since the leader of the Narodnaya Hramada and co-chair of the committee, Mikalai Statkevich, had been imprisoned, alongside other electoral candidates, Sakharov prize winners and more than 600 human rights activists.  Due to the imprisonment of opposition leaders, Belarusians had been protesting without any leaders, and in the process forming a new Belarusian political nation. It was emphasised that these protests were not to do with choosing between east or west, but an internal Belarusian protest in favour of democracy and respect for human rights.

The democratic challenges faced in Kyrgyzstan were described by Temirlan Sultanbekov (SDP), who outlined the situation leading up to the massive protest and the fall of the previous regime in October. The SDP had been prevented from conducting its campaign during the election that preceded those developments, with severe pressure placed on party members. Following the resignation of former president Jeenbekov, he expressed optimism for the future in which those who had committed crimes will be held to account and all political prisoners released. The party had not sought to seize power during the unrest but was willing to take part in democratic parliamentary elections and then play its role in a coalition or in the opposition.

Askhat Rakhimzhanov (OSDP) reported that in Kazakhstan some changes had taken place that made it easier to form political parties and increase the plurality of opinions in the political sphere. There had also been a special law on gender equality in administrative bodies and party lists and holding demonstrations had also been made easier. He explained the decision taken by the OSDP at its congress to boycott forthcoming elections, as electoral laws had not being amended despite the party's efforts. As the only opposition it had also been subject to a lot of provocation in the previous months, including efforts to take over the party by outside actors.

In concluding remarks, SI secretary general Luis Ayala underlined that the SI had made the resolution of conflicts a part of its identity everywhere and would continue to bring together its member parties in search of common ground, compromise and cooperation. Democracy continued to be a major challenge in the region and he noted that the SI had made efforts to secure the participation of a delegate from Tajikistan, where there was a severe lack of rights, freedoms and democracy, and social democrats faced an extremely difficult situation. We are also reaching out to like-minded friends in Uzbekistan, who are suffering a similar fate. On conflict resolution and human rights, the SI continued to be in touch with the United Nations. He considered that as a political family the SI is truly involved in this region and is getting results. He paid tribute to social democrats across the region who were working for democracy and progress, improving the situation with hard work and perseverance, and expressed his pride that members of this political family were at the forefront of these efforts.