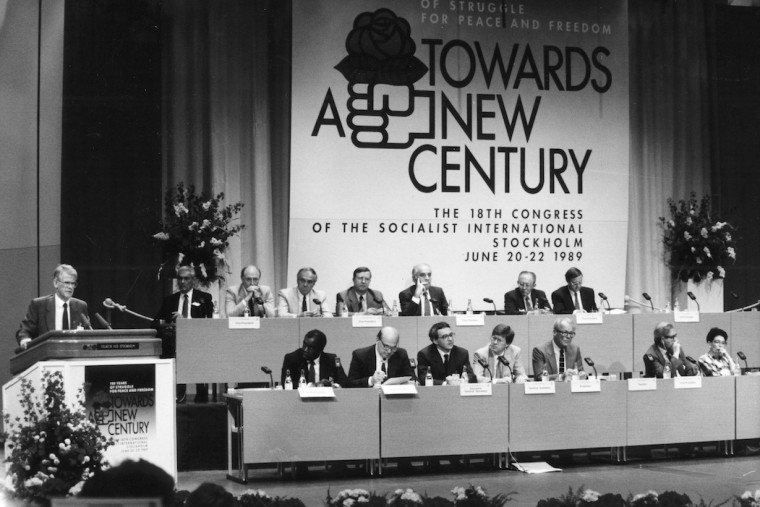 But the meeting was also an event of crucial relevance to the political struggles of today.

Called with the theme of ‘One Hundred Years of Struggle for Peace and Freedom – Towards a New Century’, the Congress analysed the major transformations that have taken place in the world in the postwar period and addressed the challenges facing democratic socialists as they stand on the threshold of the twenty-first century.

In addition to the main Congress resolution on the current world situation, the meeting also adopted a new Declaration of Principles of the Socialist International, which provides the SI with a guiding platform for action in the decades to come.

After several years of rigorous discussion and preparation – launched at the Madrid Congress in 1980 and further developed at Lima, Peru, in 1986 – the new charter supersedes the 1951 Frankfurt Declaration (which reestablished the SI in the wake of the Second World War).

Presenting the new declaration to Congress, Heinz Fischer of the Austrian Socialist Party (SPÖ) and a member of the committee which drafted the document, said that democratic socialists had an ideal opportunity to get their message across.

Communism was in crisis and conservatives faced growing difficulties throughout the world. Democratic socialism was clearly the force of the future.

A series of speakers welcomed the declaration’s heightened emphasis on environmental protection as a fundamental part of the socialist project; its commitment to gender equality; its will to harness the potential of new technology to democratic ends and social progress; its pledge to bridge the gap between North and South; and its reference to the intrinsic link that should exist between socialism, democracy and human rights.

They noted that the ideology of democratic socialism was also gaining ground in Eastern Europe.

Forward to the future

‘In the past two centuries democratic socialism has left a legacy of great and positive achievements.

‘In the developed world, we have seen the emergence of the welfare state, the creation of firm institutions of democracy…

‘In developing countries, democratic socialists have contributed greatly to the struggle for national liberation and to economic and social development…

‘Now, in 1989, we see the achievements of the past as the starting point for our advance into a new century. And, conscious of the particular challenges of today’s world, we add to the inspirational watchwords of the past those of peace and the environment…

‘Our movement looks forward to meeting and overcoming the challenges of the last decade of the 20th century. Our new declaration of principles sets out just what that involves…

‘Today’s is a fast changing world – where new technologies offer new opportunities and also threaten our survival; where economic relations become ever more international in scope, and where the achievements and values which we uphold have been challenged.

‘But it is increasingly clear, after a decade of the so-called revolution of the new right, that people remain convinced that their governments should accept responsibility for economic and social affairs… that they do not wish to see the real achievements of the past century scrapped in favour of a return to the divisiveness of another era’

This was the forward-looking spirit of the eighteenth Congress of the Socialist International (SI) in Stockholm on 20-22 June. (Extracts from the Congress resolution)

As well as adopting the main resolution and the new declaration of principles, the Congress went on to give its backing to two other key documents.

The first, which Congress approved, was ‘Humanitarian action: the SI Platform on Human Rights’.

Speaking as chairman of the SI Committee on Human Rights which had prepared the document, SPÖ International Secretary Peter Jankovitsch pointed out that any step towards social progress began with the defence of fundamental freedoms.

That was why the protection of human rights and the political practice of the SI were inextricably linked, he said.

Anita Gradin, the President of the Socialist International Women (SIW), declared that there should be no contradiction between the protection of individual civil and political rights and the social rights of individuals.

The causes of violence, poverty and inequality, however, were structural and it would require political action to bring about a solution.

She also drew attention to the subordinate position of women, both North and South, saying that wherever human rights were violated, it was often women who were most exposed.

A comprehensive programme of action was needed to defend human rights in all countries, and to protect those who were working in this field.

The second document endorsed by Congress was the report of the SI Committee on the Environment, ‘Towards Environmental Security: A Strategy for Long-term Survival’.

Presenting the report, Birgitta Dahl, the Swedish Minister of the Environment, predicted that growing public awareness of the critical state of the environment worldwide would mean that the issue would have a major political impact in the next three years.

The struggle for a safe environment, she said, went hand in hand with the struggle for development and for peace. No other industry squandered as many resources as the arms industry and there was no greater environmental disaster than the nuclear holocaust.

What was needed was a pattern of economic growth that was sustainable in both social and ecological terms. The life style of the industrialised countries placed the earth’s life-support system at risk.

Condemning what she called ‘environmental colonialism’, Birgitta Dahl drew attention to the activities of companies and governments which exploited the people and natural resources of the poorer countries.

The environment was a question of the quality of everyday life, she said, and environmental considerations would have to form an integral part of policies on food, housing, energy, transport, industry and urban development.

Throughout the Congress, speakers stressed that environmental damage and disasters knew no boundaries – Chernobyl, for example – and that close international cooperation was crucial to a strategy of survival.

Congress unanimously reelected Willy Brandt as President – a post that he has held since the Geneva Congress in 1976 – for a further three-year term.

In his acceptance speech, Willy Brandt evaluated the work of the SI since the 1986 Lima Congress and set out the challenges facing democratic socialists in the period ahead.

One of the most important developments in the last decade, he said, had been the SI’s growing contact with democratic socialists in the developing world. The contribution made by member parties in Latin America and the Caribbean had been particularly important, as had that of friends in West Africa. The SI had also forged closer links with the liberation movements in Southern Africa. The SI, however, was merely at the beginning of what it wanted to accomplish internationally, he added.

Since 1976, the SI had successfully pinpointed the interdependence between disarmament and development, and was now devoting proper attention to environmental issues. Such analysis had won the organisation recognition and respect. But much practical work on these issues still remained to be done.

Moreover, given Asia’s increasingly important role on the world stage, the SI needed to develop closer links with progressive forces in that region.

Brandt pointed out that the global nature of many world problems required a coordinated international response. And in turn, members of the SI needed to gain a new understanding of socialist internationalism, especially when forces of the right – bent on anything but the values of solidarity and world justice – were stepping up their level of global cooperation.

He also noted that the gradual normalisation of east-west relations was opening the door to new opportunities for international cooperation. Progress had been made in disarmament and conflicts around the world were beginning to ease. New centres of gravity were taking shape as the cold war gave way to a more multipolar world.

A key question for democratic socialists, he said, was what form a new phase of multilateral cooperation should take. Existing international bodies had been set up in the wake of the Second World War and it was time for their reform.

Brandt admitted that the tasks facing the SI were daunting. But the driving force of the democratic socialist movement was hope and that was why it would succeed, he concluded.

In addition to the election of the SI president, Congress elected Luis Ayala as the organisation’s new general secretary.

A Chilean, Ayala had served as assistant general secretary at the SI secretariat in London since 1985. He was previously SI secretary for Latin America and the Caribbean and has had a long involvement in the SI and the international democratic socialist movement generally.

In his acceptance speech, Ayala pointed to the uniqueness of the SI, referring to the organisation as a forum where member parties could meet as equals, work for common ideals and learn from each other’s experience.

He looked forward to contributing to the realisation of the SI’s goals at a time when the message of democratic socialism had become more universal than ever.

The Congress also elected a new Presidium and dealt with a number of applications for membership. A number of existing consultative parties became full members (Congress decisions on membership).

The Stockholm Congress was well attended, with delegates of SI member parties, guests and observers coming from over 100 countries around the world.

Among the leading guest speakers were Julius Nyerere, the chairman of the South Commission, Oliver Tambo, the president of the African National Congress, and the Reverend Allan Boesak, from South Africa.

The delegates were welcomed on 20 June by SI President Willy Brandt, who congratulated the Swedish Social Democratic Party on its centenary.

Recalling the memory of Olof Palme, he drew the attention of delegates to the repression of the pro-democracy student movement in China, and asked them to stand in honour of four leading members of the SI who had died since the Lima Congress: Lydie Schmit, an SI vice-President and former president of SIW from Luxembourg; Joop den Uyl, also an SI vice-president and the former prime minister of the Netherlands; and Albert Carthy and Bernt Carlsson, both former SI general secretaries.

Bernt Carlsson, who had gone on to become the UN commissioner for Namibia having served as SI general secretary in 1976-83, was killed in the Lockerbie aeroplane bombing in Scotland in 1988.

Brandt then asked Prime Minister Ingvar Carlsson of Sweden, as the chairman of the Swedish Social Democratic Party hosting the Congress, to address the delegates.

Welcoming the SI’s move towards a more diverse and international membership as a sign of the growing strength of democratic socialism worldwide, Ingvar Carlsson stressed the importance of international socialist coordination.

Effective cooperation was crucial to the success of democratic socialists in a number of key tasks: to fight unemployment; to promote economic justice; to seek peace and common security; to save the environment; and to bridge the gap between North and South.

The main feature of Carlsson’s speech, however, was its emphasis on the need for democratic socialists to extend the principles of democracy to all areas of social and economic life.

The achievement of full democracy in society meant bringing the economy under democratic control, ensuring that workers and consumers had a crucial say in economic decisions and the production process.

Rejecting the outright state control of communism and the unbridled play of market forces under capitalism, Carlsson said that democratic socialism was right to search for more diverse ways of exerting popular control over production.

Democratic socialism meant providing the means to exert control over all aspects of everyday life, thus enabling people to realise their individual potential and shape their own destiny.

From the struggle for peace and human rights to the international economy and a strategy for environmental survival, the Stockholm Congress had a wide-ranging agenda.

Speech by Willy Brandt, President of the Socialist International