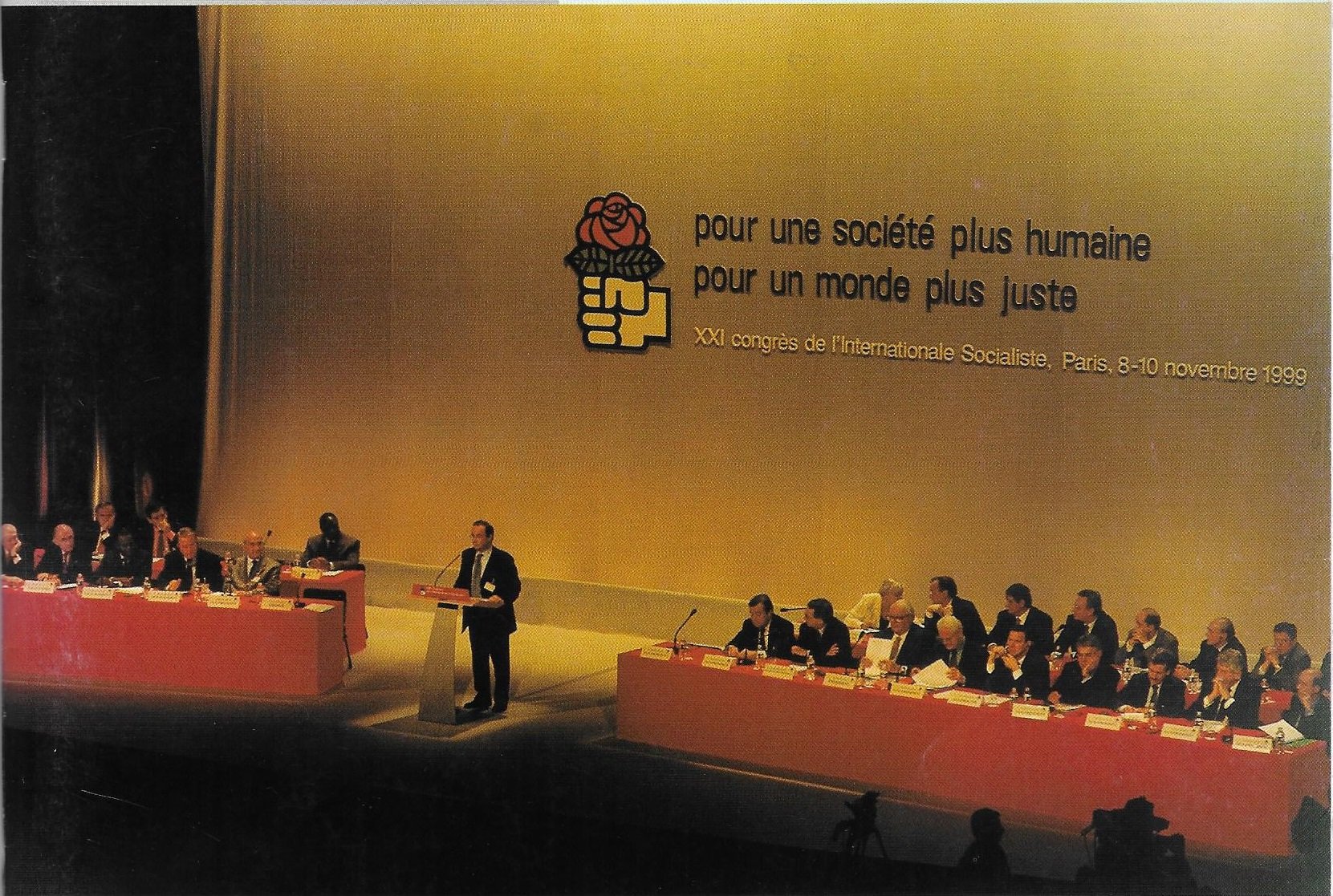 In Paris on 8-10 November 1999, delegates from all over the world took part in the largest meeting of the Socialist International ever held.

The XXI Congress of the International, held in Paris from 8 to 10 November 1999, brought together from all continents heads of government and party leaders of the social democratic movement under the banner ‘for a more humane society, for a world more fair and just’ with the two main themes: ‘Democratic socialism in the next century’ and ‘The path of peace and solidarity’.

Representatives from more than 150 parties and organisations attended the Congress.

The International returned to Europe, fittingly to Paris, a city rich in the history of the struggle for liberty, justice and equality, for this twenty-first Congress following the successful Congress held at the headquarters of the United Nations in New York in 1996. This meeting, held seven years after the momentous Congress in Berlin, also remembered the tenth anniversary of the fall of the Berlin Wall.

Opening the meeting, François Hollande, First Secretary of the Socialist Party, PS, France, welcomed the participants. Pierre Mauroy, outgoing SI President, in his opening address reflected on his time at the head of the International and on the expansion of the organisation in recent years.

The ‘Declaration of Paris’ reflecting the debate on the first main theme, was adopted unanimously by the Congress.

As the highest statutory body of the International, the Congress also decided on the admission of new member parties and organisations. The Congress admitted thirteen parties to various categories of membership, as well as a new associated organisation. Membership status was also upgraded for a number of parties (List of new members and changes of status).

Guterres paid tribute to Pierre Mauroy’s work as President of the SI since 1992 and proposed that he become an Honorary President of the International. The Secretary General, Luis Ayala, who presented a report on the inter-Congress activities of the SI, was re-elected by the Congress. Vice-Presidents were also elected (Members of the Presidium).

Initiatives on SI Structures and Organisation

The Secretary General presented a number of proposals on the structure and organisation of the International which were approved by the Congress. The initiatives included the establishment of a small group within the Presidium, an Executive, to work closely with the President and the Secretary General. The holding of a new type of progressive world forum with the participation of leading social democratic personalities, including governmental leaders, as well as noted economists, academics and labour and business figures was agreed. Further initiatives included enhancing the work of the Council, developing an expanded communications strategy of the International, pursuing alternative sources of funding, establishing structures to help advance, where needed, the organisational capacity of member parties by drawing on the resources and experience of members, and strengthening the capability of SIFAC to increase its representativity.

Focusing on a number of regional and thematic concerns to the Socialist International, a General Resolution was adopted on the final day of the XXI Congress. Issues addressed included democracy, peace and development and globalisation in Africa; priorities and perspective for social democracy in Asia and the Pacific; the situation in Europe and issues concerning Central and Eastern Europe; developments in the Mediterranean; the renewal of the Middle East peace process; the challenges for Latin America and the Caribbean; and the work of local and regional authorities. The resolution also considered in detail many national situations (General Resolution in full).

Report of the Secretary General

Raport of the Secretary General