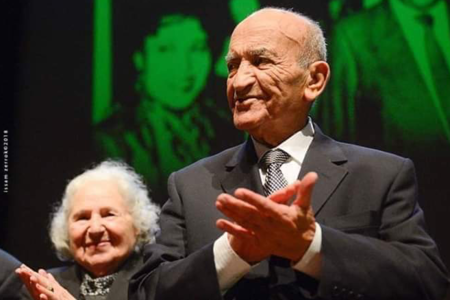 The Socialist International pays tribute to, and fondly remembers, Abderrahmane Youssoufi, former Prime Minister of Morocco, former First Secretary of the Socialist Union for Popular Forces, USFP, and former SI Vice-President, a dear friend and comrade who passed away this morning aged 96.

Born in Tangier, Abderrahmane Youssoufi was a devoted socialist from his youth, observing from his early years the need for the protection of human rights and endeavouring to support the working class of Casablanca, aged just twenty. He left for France in 1949 to study law and political science but whilst there, he also took on the support of the rights of migrant Moroccan workers abroad. He later returned to practice law in Tangier from 1952 to 1960 and became president of the bar association of lawyers in his jurisdiction.

In 1953, after King Mohammed V was deposed, Youssoufi contributed to the resistance movement in the country seeking liberation. In 1959, along with others, he helped create the National Union of Popular Forces (UNFP) which took the central opposition role to the regime. Abderrahmane Youssoufi was arrested with other members of the party for his work, and sentenced to two years in prison for conspiracy against the regime. In 1965 he left for Paris, and remained in self-imposed exile in France for 15 years. He continued to be active in the field of human rights, joining the Union of Arab Lawyers, an NGO which selected him as their assistant secretary general between 1969 and 1990; the Arab Organization for Human Rights; SOS Torture; and the Arab Institute for Human Rights. Morocco, at the time, was seeking further sentences against him, including the death penalty.

In 1975, the UNFP changed its name to the Socialist Union of Popular Forces, USFP, and Abderrahmane Youssoufi was appointed its permanent delegate outside the country, and later, in 1978, a member of its political bureau. In 1980, Youssoufi was pardoned and he returned to Morocco. He was awarded the North-South prize in 1991 in recognition of his commitment and achievements to human rights, and in 1992 he become the First Secretary of the USFP. In the year following, Youssoufi left the country again in protest at the 1993 electoral rigging, however he returned in 1995, as he was needed by his party.

The USFP won the legislative elections in Morocco in 1997 and Abderrahmane Youssoufi was appointed Prime Minister on 4 February 1998 by King Hassan II, a post he held until October 2002.

Throughout his time in government, Abderrahmane Youssoufi endeavoured to improve freedoms and rights for the people of Morocco, becoming a bastion of social democracy not only in his country but throughout the wider region.

Not surprisingly, Abderrahmane Youssoufi was an active and committed member of the Socialist International, and we have the honour of remembering his work and dedication to our principles and values. He took part in many SI Councils and Congresses, including the XXI SI Congress in Paris and XXII Congress in São Paulo where he was elected SI Vice-President at both. In October 1998, the USFP hosted the Second World Conference of Mayors of the SI, a gathering of over two hundred and fifty mayors of municipal governments and organisations, in Fez. Prime Minister Youssoufi’s address emphasized that the shared values of those present, such as justice, solidarity, social equality, democracy, and a respect for human rights, were essential in creating the best conditions for true citizenship. At the Geneva Council in 1998, a resolution was passed supporting his efforts to strengthen the democratic process, rule of Law, the fight against unemployment and to improve citizens’ standard of living in Morocco. In 2001, Youssoufi welcomed SI members to a meeting of the SI Committee on the Economy, Social Cohesion and the Environment held in Casablanca, saying ‘the planet is still increasingly divided and the gaps are widening’, underscoring his determination to achieve a more just society for all. He hosted, with the USFP, a very successful SI Council in Casablanca in 2002, where a historic resolution on the conflict in the Middle East was unanimously agreed.

As head of the USFP, Abderrahmane Youssoufi was always a leader who was committed and dedicated to the activities of our International. He was widely respected around the world and his role as Vice-President of the Socialist International was deeply appreciated by all his comrades on all continents. We are honoured to have worked with him, and he will long be remembered by our global political family. Our thoughts and feelings are today with his wife Marie-Hélène and with his family. We also extend our deepest condolences to the USFP and to all its members.

The Arab Weekly, 31 May 2020
Moroccan veteran politician Abderrahman El-Youssoufi passed away Friday in Casablanca at the age of 96. El-Youssoufi was born in Tangier, in northern Morocco, on March 8, 1924. He was one of the few people who kept close ties with a wide spectrum of lawmakers and activists from all affiliations in his country’s politics, science, and culture... Read more