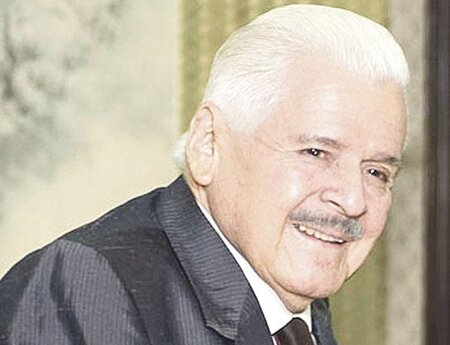 The Socialist International deeply mourns the loss of Bernal Jiménez Monge, a Vice-President of the SI and former president of its member party in Costa Rica, the National Liberation Party (PLN), who sadly passed away on 20 March at the age of 91.

Within the Socialist International he was extremely active for many years, in particular as a member of our Committee for Latin America and the Caribbean, but also in his role as SI Vice-President, participating regularly in SI Councils, Congresses and missions. He continued actively working with us, and contributing to our activities, right up until his death.

A fervent and committed social democrat, Bernal Jiménez Monge, became a member of the political directorate of the PLN in 1978, and head of the PLN fraction in the National Assembly for the period 1982-1983 and again in 2002-2003. Between 1982 and 1986, he served as deputy for the province of San José, a role he gained for another four years in 2002. Between 1984 and 1985 Bernal Jiménez was president of the Legislative Assembly, and he was appointed an Honorary Ambassador from 1995 to 1996.  In 2010 Bernal Jiménez became president of the PLN, a post he held until 2014.

Bernal Jiménez had graduated in economics and business administration in Costa Rica and continued his studies in Chile in economics and economic development. After this, he was appointed a member of the Board of Directors of the Central Bank of Costa Rica, a role he held from 1957 to 1960. Bernal Jiménez took on a number of ministerial roles. In 1962-63 he was Minister of Planning; from 1964 to 1965 he served as Minister of Economy and Finance and in 1965 he was Minister of Industries.

Between 1966 and 1970 he represented Central America on the Inter-American Committee of the Alliance for Progress, and afterwards, in 1970, he became a member of the Expert List of the International Center for Professional Updating, CIAP, until 1973. Between 1973 and 1974 he was president of the Board of Directors of the Monetary Authority; and from 1974 to 1977, he was Executive President of the Central Bank of Costa Rica.

Bernal Jiménez was tireless in his work and commitment for a better society for all, focussing on fairer economic policies and welfare.

The Socialist International pays tribute to a great friend and comrade and extends its deepest condolences to his family, friends and comrades.