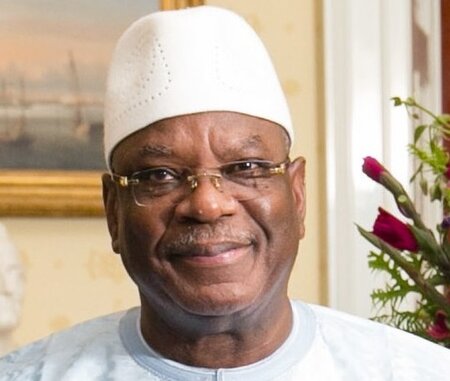 Ibrahim Boubacar Keïta, fondly known as IBK, was dedicated to working for the people of Mali throughout his life. He studied at schools in Paris and Bamako, and then at the University of Dakar, and the University Panthéon-Sorbonne and the Institut d'Histoire des Relations Internationales Contemporaines, IHRIC, in Paris. He gained postgraduate degrees in both history, and politics and international relations.

Before entering politics, Keïta worked in development programmes, creating one of the first for the European Union’s aid work in Mali in the 1980s. He was principal technical advisor of the European Development Fund and later appointed director of Terre des hommes for Mali, Burkina Faso and Niger.

Ibrahim Boubacar Keïta was involved in the founding of the Alliance for Democracy in Mali - African Party for Solidarity and Justice, ADEMA-PASJ, in 1990 and elected its Secretary for African and International Relations at its congress in 1991. He was appointed Deputy Director for Alpha Oumar Konaré’s presidential campaign and became his senior diplomatic advisor and spokesperson in June 1992 when Konaré became president. Later that year, President Konaré designated him ambassador to Cote d’Ivoire, Gabon, Burkina Faso and Niger.

In November 1993, he became Minister of Foreign Affairs, Malians Abroad and African Integration. On 4 February 1994, President Konaré selected Keïta for Prime Minister, a role he retained until 2000 after Konaré reappointed him in 1997. Keïta also held the presidency of ADEMA-PASJ from 1994 until June 2000 after which he formed and led a new party, the Rally for Mali, RPM.

He ran again for president of Mali in 2007 and came second. During these years, Keïta did not cease in his political activities and worked as a member of the Pan-African Parliament, a member of the Commission of Foreign Affairs, Malians Living Abroad, and African Integration in the National Assembly between 2007 and 2008, and a member of the Parliament of the Economic Community of West African States.

In 2013, after winning two rounds of elections, Ibrahim Boubacar Keïta was sworn in as President of Mali on 4 September. He was re-elected for a second term in 2018.

In August 2020 Keïta’s government suffered a military coup and he and others were detained by force. Concerned over loss of Malian lives, Keïta resigned, dissolving the parliament and government saying ‘no blood should be shed to keep me in power’. The Socialist International was vocal in speaking out against the coup, as well as vigorously condemning the subsequent coup that took place in May 2021. The SI continues to firmly call for the immediate restoration of the constitutional order and the holding of elections in Mali.

Throughout his presidency, Keïta worked tirelessly to strengthen democracy and seek peace and stability in Mali. He was unwavering in his determination for national dialogue and reconciliation with parties across the country whilst leading efforts against insurgents and terrorists.

Ibrahim Boubacar Keïta was an active and deeply respected member of the Socialist International. He was elected Vice-President of the SI in 1999 and both hosted and participated in meetings of the SI Africa Committee as well as other meetings of the organisation.

Ibrahim Boubacar Keïta has been integral to the advancement of social democracy and our shared principles in Mali and beyond. He will remain a central figure in the country’s political history for generations to come.

The Socialist International extends its deepest sympathies to his family, to the members of his party, and to all democrats in Mali who are today, as he was himself, in the forefront of the struggle to restore democracy in their country. He will be long remembered by our International’s global family as a genuine friend and comrade and his loss is felt by us all at this time.