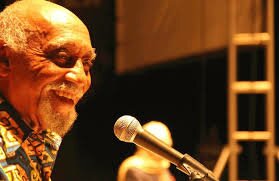 The Socialist International celebrates the life of Marcelino dos Santos, one of the founders of our member party in Mozambique, the Frente de Libertação de Moçambique, FRELIMO, and former President of the country’s People’s Assembly, who has sadly passed away aged 90.

Marcelino dos Santos worked tirelessly for freedom and justice for colonised countries and with Frelimo was at the forefront of Mozambique’s fight for independence. He devoted his early life to the liberation struggle, studying in Lisbon and France with other exiles, and in 1957 he helped form the Anti-Colonial Movement in Paris. He was a founding member of the Conference of Nationalist Organisations of the Portuguese Colonies (CONCP), in 1961 in Casablanca, along with Mario Pinto de Andrade from Angola and Amilcar Cabral, leader of the Guinea-Bissau liberation struggle. Dos Santos was CONCP’s first Secretary General. In 1962 he contributed to the founding of Frelimo, the party he dedicated his life to.

Marcelino Dos Santos was Frelimo’s Deputy President from 1969 to 1997, Secretary for External Affairs from 1965 to 1970, Minister of Economic Development in the late 1970s, member of the Frelimo Political Bureau in charge of economy in the early 1980s, and President of the People’s Assembly, the second-highest role in the country, from 1987 to 1999.

Among his honours and achievements, Marcelino dos Santos was declared a national hero in 2015; was received at the Vatican in 1970 and given a copy of the papal encyclical Populorum Progressio on the problems of the under-developed world; and was also renowned as a poet and literary figure. He will be given a state funeral.

The Socialist International conveys its heartfelt sympathies to his family and to all members of Frelimo. He will be long remembered in history not only in Mozambique but throughout the African continent and wider world.