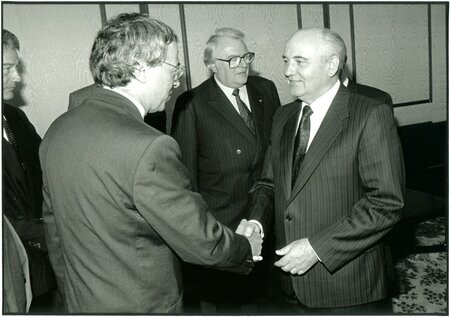 Mikhail Gorbachev was a dedicated Marxist-Leninist since his youth, graduating with distinction at law school of the Moscow State University, and working for the Communist Party throughout his long career. Gorbachev was appointed General Secretary unanimously on 10 March 1985 after the death of Konstantin Chernenko. Throughout his life, Gorbachev was recognised as a man of the people, and in his political positions he sought to help and support the working class and welcomed younger people and women to professional roles. He was dedicated to building a socialist society that was democratic and knew he could improve and change the struggles of the Soviet Union by establishing a working and transparent social democracy for the people. He began to introduce reform policies under the label perestroika that incorporated a socio-economic restructuring which ushered in private enterprise, production, and a market open to foreign companies, albeit within the centrally planned economy. In 1986, Gorbachev introduced glasnost, a term denoting government transparency and openness, in order to further stabilise the societal view of the government and to demonstrate its determination to clamp down on corruption and increase open political discussion. Such initiatives did change the face of the Soviet Union and greatly impacted both the soviet people, the wider region, and the rest of the world. His foreign efforts were equally paramount as he sought international diplomacy and negotiations to demonstrate his will to find an end to the Cold War. In November 1985 he met with US President Ronald Reagan in Geneva, the start of a number of international summits to discuss ending hostilities. It was Mikhail Gorbachev who proposed ending nuclear weapons worldwide in 1986, and later agreed to halve Soviet nuclear missiles in a deal with the US to terminate their Strategic Defense Initiative. The deal failed however Gorbachev continued to seek possibilities for peace. In 1987, Gorbachev’s negotiations with the US succeeded in the signing of the Intermediate-Range Nuclear Forces Treaty with President Reagan, and in 1988 further discussions resulted in a cooling of hostilities between them. In 1988 he convened their 19th Party Congress, three years before it was actually due to be held, at which he further laid down his ideas for democratic reforms and a move to a socialist state under the rule of law, and the Congress of People’s Deputies of the Soviet Union was established. He introduced the idea of multi-party elections for Congress legislators, and achieved media transparency, both of the news and popular culture, reintroducing previously banned films and promoting open journalism.

Crucially, these reforms would lead to changes that had been unthinkable just a few years prior. It was Gorbachev’s democratic ideals, domestic reforms and policies that underpinned the transformation of the region, from the revolutions of the Central and Eastern-European states to the eventual fall of the Berlin Wall in 1989. Gorbachev facilitated the spread of democracy in the region despite the consequential collapse of the Soviet Union, allowing freedoms, rights and sovereignty for Soviet republics, and ultimately an end to the four and a half decade long Cold War after his resignation at the end of 1991.

Gorbachev was a man of values and demonstrated the principles of social democracy and human rights throughout his life and leadership, which led him to be an active friend of the Socialist International. He held discussions with members of the leadership of the International and contributed and attended SI meetings, including the XIX Congress in Berlin in 1992 and the meeting of the SI Committee for Central and South Eastern Europe in Moscow in 1995. In November 2000, Gorbachev sent a message to the Socialist International Council held in Maputo in which he remarked that ‘globalisation does not solve the new problems and challenges that mankind faces on the threshold of the new millennium… It is social democrats who can bridge the gap which exist between policy and life’, a theory striking of his previous political accomplishments.

The Socialist International today celebrates and remembers the life of Mikhail Gorbachev, a leader with an exceptional political career whose legacy of peace, democracy and socialism will long remain at the forefront of history.