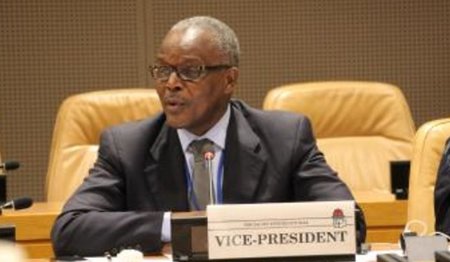 Tanor Dieng was born in Ngueniéne, to the Sérére people of Senegal. He studied law and international relations, and received his bachelor’s degree. He later studied diplomacy at the École Nationale d’Administration et de Magistrature (ENAM) and joined the Senegalese Foreign Office in 1976 as an advisor in charge of international affairs.

In 1978, the President of the Republic of Senegal Léopold Senghor appointed Tanor Dieng as his Diplomatic Advisor, and he continued this role when Abdou Diouf became president in 1981. He later worked as Chief of Staff, and in 1993 was appointed Minister of Services and Presidential Affairs. Committed to the Socialist Party of Senegal, Tanor Dieng was a member of its Political Bureau, and in 1996 became the party’s First Secretary. He was the PS presidential candidate in 2007 and 2012.

Within the Socialist International he was a constant and dedicated participant in the various activities of the International, from the global Council meetings held in different continents, to regional meetings, in particular in Africa, where his knowledge and commitment to the principles and values shared within our global family, were widely appreciated by all.

Our thoughts and deepest sympathies are with his family, friends and comrades.

SI at the funeral of Ousmane Tanor Dieng

Gathering of family, friends and comrades of Ousmane Tanor Dieng