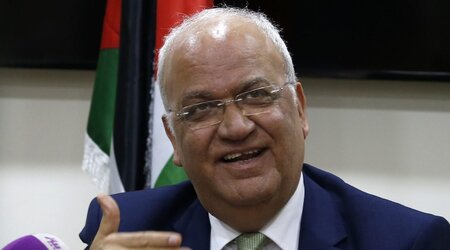 The Socialist international was deeply saddened to learn of the passing this morning of Saeb Erekat, a remarkable international peace negotiator for Palestine, Secretary of the Executive Committee of the Palestine Liberation Organization, member of the Fatah Central Committee, and a tireless comrade of the Socialist International, who has died from COVID-19 complications.

Saeb Erekat worked extensively for Palestine and for a peaceful, two-state solution to the conflict. He studied international relations and politics in the USA, and gained his PhD in peace and conflict studies in the UK. Erekat taught political science at An-Najah National University in Nablus, West Bank, and for many years worked on the editorial board of Palestinian newspaper Al-Quds.

Saeb Erekat was a key figure in the efforts for peace throughout the last forty years and had a gift for dialogue and mediation. In 1991 he was selected deputy head of the Palestinian delegation to the peace conference in Madrid, and the later talks in Washington in 1992 and 1993, and in 1995 he was appointed chief negotiator for the Peace Process, and undertook negotiations for the Oslo Accords.

Among his many roles, he was Minister for Local Government of the Palestinian National Authority in 1994, and in 1996, he became a member of the Palestinian Parliament for his home town Jericho, which he held until his death. He worked as a senior adviser to Yasser Arafat and, later, to current President Mahmoud Abbas and remained chief of the PLO Steering and Monitoring Committee until 2011. In 2015 he was appointed Secretary General of the Executive Committee of the PLO.

The Socialist International has always taken an active role in the search for peace in the Middle East, and Saeb Erekat was an active participant in many of its meetings and initiatives in the region. The International extends its deepest sympathy to Saeb Erekat’s family, and conveys its sincerest condolences to all members of Fatah at this difficult time.