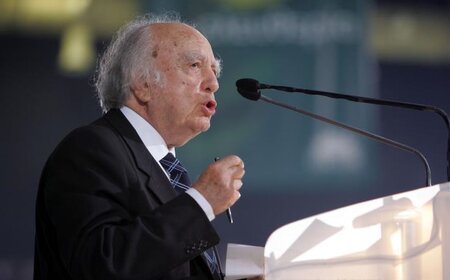 The Socialist International mourns the passing of Vassos Lyssarides, founder of SI member party the Movement of Social Democrats, EDEK, and a prominent and respected MP who worked tirelessly for peace and democracy in Cyprus.

Vassos Lyssarides studied medicine and trained and worked as a medical doctor. However, as a student he engaged in politics, becoming president of both the Pan-student Committee for the Cypriot Struggle and the Student Union of Cypriots, as well as secretary of the Coordinating Committee of Cypriot Associations. Lyssarides joined in the Greek-Cypriot War of Independence, which took place between 1955 and 1959, during which time he created an ‘Organisation of the Left Patriots’. In 1960 he was elected MP with the Patriotic Front, in the first parliamentary elections of Cyprus. In 1969, dedicated to forging rights and democracy for the Cypriot people, he founded EDEK, which was then named the United Democratic Union of the Centre, and was the first socialist party in Cyprus. In 1970, Vassos Lyssarides was again elected MP, this time with EDEK, and in total he remained an MP for more than forty years. In 1974, he resisted a military coup and survived an assassination attempt on is life. He also held the post of Speaker of the House of Representatives, from 1985 until 1991. In 2001, Vassos Lyssarides stepped down and was appointed an honorary president of the party.

Amidst his many political roles, he also served as a member of the Selection Committee and the ad hoc Parliamentary Committee on the Rules of Procedure of the Parliament, as vice-president of the Afro-Asian Solidarity Organisation, and secretary general of the International Committee Against Racial Discrimination, Racism and Colonialism. Among other awards, in 2002 he received the Supreme Honorary Distinction of the Palestinian Authority, from Yasser Arafat.

Vassos Lyssarides is remembered for his determined and indefatigable work in securing a social democracy in Cyprus that put the people first. An active member of the Socialist International, Vassos Lyssarides participated in many of our meetings, Councils and Congresses, and was well-liked and deeply valued. The International conveys its deepest sympathy to his family and party at this time.