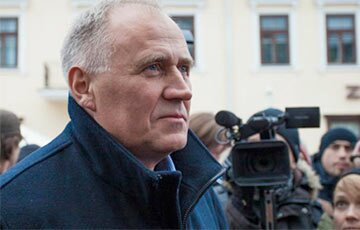 Mikalai Statkevich, leader of the SI’s member party in Belarus, Narodnaya Hramada, has been held as a political prisoner by the Lukashenko regime for more than a year. His trial is scheduled to take place at 10am on 24 June 2021, at Homiel pre-trial detention centre, 305 kms from the capital Minsk, where he is being held. The trial, like other sham trials in Belarus, will be carried out behind closed doors. Mikalai Statkevich previously served a five year sentence in 2010, when he ran as a presidential candidate against Lukashenko.

The Socialist International is deeply concerned for his fate. During his time in detention, Statkevich has been denied all contact with his family and has had limited access to his lawyer.

Mikalai Statkevich is an active member of the Socialist International and is co-chair of the SI Committee for the CIS, the Caucasus and the Black Sea. He has worked tirelessly, at the risk of his freedom, to bring change and democracy to Belarus and to free the Belarusian people from Lukashenko’s dictatorship.

The Socialist International, the global organisation of social democratic, labour and democratic socialist parties, calls on all its members worldwide and on the international community at large, to once again vigorously protest against this political persecution by the Lukashenko regime and to demand the freedom of Mikalai Statkevich and all those who are unjustly incarcerated in Belarus.

SI calls for the immediate release of Mikalai Statkevich, 2 July 2020