In Guatemala the case against Sandra Torres is political persecution 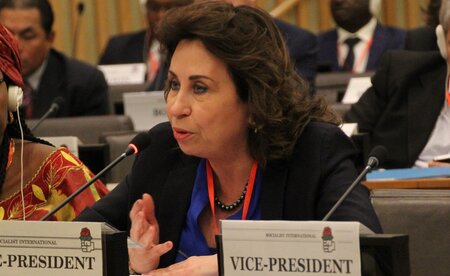 • The case of Sandra Torres is a political case and not a legal one. The political persecution against her has unfortunately been based on misinformation by some public prosecutors, who until now have not shown their impartiality and independence in accordance with international standards.

• The rule of law and Guatemalan democracy are once again going through a critical moment. It is necessary to strengthen its institutions and the protection of human rights, as well as democratic elections, with transparency and accountability.

• All citizens, voters and candidates must have the necessary guarantees to participate in electoral processes, in accordance with international standards.

• No one can be prosecuted for conducts that were not crimes at the time; and furthermore, criminal proceedings must scrupulously respect the judicial guarantees enshrined in the Constitution and the laws of Guatemala, as well as in international instruments on human rights.

• Due to the aforementioned, one of the oldest guarantees of due process is the presumption of innocence. A person cannot be convicted neither by the prosecutors, nor by the press, nor by their political enemies. In a democratic state, a person can only be subjected to proceedings when there are objective elements that seriously presume their responsibility; but they cannot be convicted unless an independent and impartial judge declares them legally guilty, beyond all reasonable doubt.

• The process undertaken against Sandra Torres has revealed the political persecution against her, to thereby try to exclude her and disqualify her as an electoral candidate. This is evidenced by the facts themselves: the day after (February 6, 2019) the Supreme Electoral Tribunal of Guatemala handed Sandra Torres the credentials as presidential candidate of the National Unity of Hope (UNE) party, the Public Ministry, through the Special Prosecutor's Office against Impunity, filed against Sandra Torres (and 4 MPs of UNE) the request for their criminal preliminary trial.

• Despite the fact that the Supreme Electoral Tribunal, as the highest authority on electoral matters, verified and audited the UNE party with a favorable opinion on financial matters without any qualms, just three (3) days before the second presidential round, the Public Ministry requested the cancellation of the UNE party, supposedly for the crime of illegal electoral financing; and on those same dates, the other presidential candidate (supported by businessman tycoon Dionisio Gutiérrez) presented to the Public Ministry a request for an arrest warrant promising that if he won he would put Sandra Torres in jail.

• Subsequently, once Sandra Torres had lost in the second round of the presidential elections and therefore was without immunity (September 2, 2019), the Public Ministry requested an arrest warrant against Sandra Torres for the alleged crimes of Unreported Financing and Illegal Association.

• The crimes for which Sandra Torres is accused show the arbitrariness of the case fabricated against her, in violation of the universal principles of human rights:

• The case against Sandra Torres should be closed as soon as possible because it lacks foundation and is a case of clear political persecution, which compromises the international responsibility not only of the Guatemalan State, but also of the prosecutors and judges who participate improperly.