On occasion of UN Summit, Heads of State and Government hold informal discussions under auspices of SI 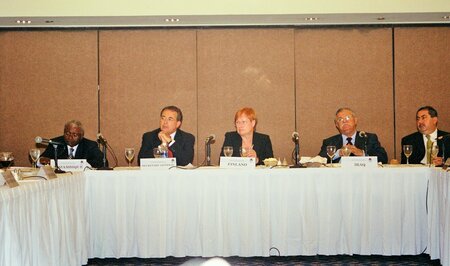 A number of Heads of State and Government participating at the United Nations 2005 World Summit which opened on 14 September in New York gathered under the auspices of the Socialist International for informal discussions on the eve of the Summit. Their discussions centred on the Summit negotiations, the United Nations reform process and the Millennium Development Goals.

At the gathering, the first ever of this nature, and which was attended by Heads of State and Government from the different regions of the world, some participants also took the opportunity to address developments in their respective countries.

Other issues discussed ranged from energy costs and agricultural subsidies, to environmental policies and security questions.

This initiative, which was welcomed by all those present, concluded with a consensus to enhance the work of the United Nations and to continue efforts towards realising a more effective and fair global governance and the need to achieve the Millennium Development Goals.

The usefulness and importance of continuing with this type of gathering was underlined, and all agreed that similar discussions should also take place in the future in connection with other Summits.