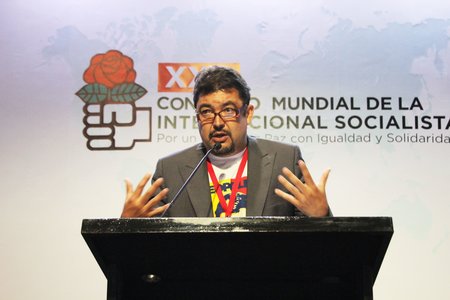 On the 21st of March at two in the morning, police and intelligence agents of the Venezuelan regime broke into and vandalised the home of Roberto Marrero in Caracas and took him away by force. Marrero, of Voluntad Popular, a member party of the Socialist International, is the head of the office of the President of the National Assembly, Juan Guaidó, recognised as the interim president of Venezuela by a large number of countries worldwide. The agents, as reported by Sergio Vergara, a member of the National Assembly of Venezuela and a neighbour of Marrero, left in Marrero’s house two machine guns and a hand grenade, and subsequently accused him of being a terrorist.

It is crucial that the international community react strongly to this assault, detention and the false accusations by Maduro’s regime against the person who is the closest collaborator of Juan Guaidó, demanding his immediate release.

Above, Roberto Marrero addressing the last Congress of the Socialist International held in Cartagena, Colombia.