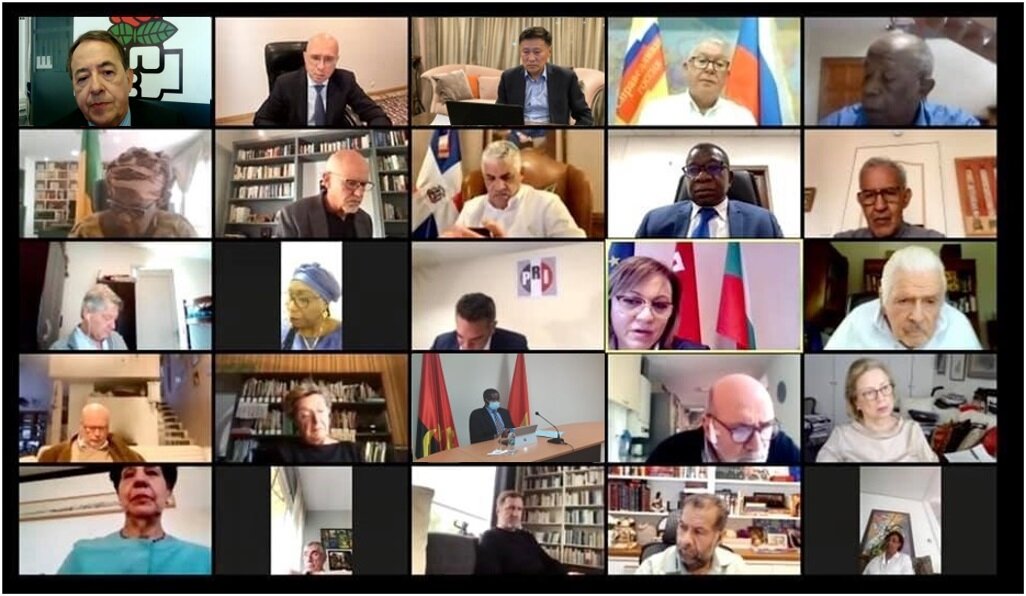 The SI Presidium, the leadership body of the Socialist International, met online on 24 October 2020 with participants from all continents and across multiple time zones. The discussions and contributions focused on the global and local impact of the Covid-19 pandemic and the social democratic response to the global situation resulting from the spread of the virus and its aftermath. The Presidium also discussed latest national and regional developments in relation to existing challenges to democracy and how to face the threats to peace and security in different parts of the world, building common positions on current open conflicts.

The Presidium agreed on the issuing of a communiqué, resulting from the meeting’s discussions and from subsequent consultations, published on 28 October (see full text below).

Press coverage of the meeting

Communiqué of the SI Presidium

The Coronavirus pandemic is the greatest threat to public health and economic stability for a generation, and requires a response that is based on international cooperation, solidarity and fairness. Though the virus does not discriminate on the grounds of nationality, race, wealth or social status, due to the structural inequalities between and within our societies it is having a disproportionate impact on the most vulnerable, both in regard to potential exposure to the virus and the economic impact of its spread and the measures taken to combat it. It is therefore imperative that the steps taken to mitigate the virus take into account these inequalities, and that those who have been most affected are given the support to rebuild their lives and livelihoods.

The pandemic has brought increased urgency to a number of social democratic priorities, increasing the importance of policies that the Socialist International has long advocated. These include reforms to the financial system in order to ensure that, unlike during the financial crisis of 2008, the burden of the recovery is distributed fairly. Measures must be taken to cut down on tax evasion to ensure that huge multinational companies pay their fair share of taxes. A tax on financial transactions has the potential to raise vast sums that can be used to alleviate the economic damage already caused and facilitate enhanced access to healthcare.

Key to reducing and eventually eliminating the threat of this virus in the medium to long term will be ensuring access to vaccines for the entire world. The rapid spread of Covid-19 has exposed the vulnerability of our interconnected societies to contagious diseases and it is a fact that as long as the virus remains uncontrolled in one part of the world, it is a threat to the entire planet. International solidarity and a commitment to   multilateralism, within the framework of the UN and the WHO, will be crucial in order to both ensure fair access to vaccines and to put in place the infrastructure to deliver vaccinations in countries and regions where the capacity of existing healthcare systems is limited.

The pandemic has also indirectly led to the exacerbation of existing social and political problems, and concerted efforts are needed to correct a number of troubling negative developments. Among these is the rise in domestic violence and violence against women during a time when large proportions of the global population have been living under lockdowns and similar restrictions. More must be done to eliminate the scourge of violence against women and to ensure that women are not left out or left behind during the process of rebuilding the world economy. The situation of refugees has also worsened, due to the deteriorating conditions and a shortfall in solutions for displaced persons. Another cause for concern is the evidence that a number of governments have been using the pandemic as a pretext to restrict freedoms and weaken democracy, which continues to face diverse challenges in different regions of the world.

The ongoing repression of peaceful demonstrators in Belarus following the illegitimate election results in August is unacceptable. Belarusians continue to take to the streets in their struggle for democracy and the right to choose their government, and do so with the full support of the global social democratic movement. The Belarusian opposition now has hope, with their values having been shown to be those of the majority, and their demands for change must be heard. We reiterate our call for the release of Mikalai Statkevich, the leader of our member party in Belarus, as well as the release of all the other political prisoners being held under detention by the regime.

The catastrophic political, financial and social situation in Venezuela has led to millions of citizens being forced to flee the country in inhumane conditions. Power has been stolen by the authoritarian regime of Nicolás Maduro, and needs to be returned to the people, but the conditions do not exist for free and fair elections to take place. The parliamentary elections scheduled for December have no credibility as clearly demonstrated by the overwhelming rejection by the international community of the conditions in which they would be held.

Democratic setbacks are a cause for concern in a number of other countries, including Pakistan, where opposition parties are being victimised by the government. In Cameroon, violence continues and the conditions do not exist for the free and fair holding of the forthcoming regional elections. The process of democratisation in Haiti is deadlocked, with a breakdown in the rule of law and the risk of falling into a dictatorship. The multitude of challenges to establishing and defending democracy on all continents are a reminder of the vital importance of international cooperation and for democratic governments to take a stand against increasing anti-democratic practices and a trend towards authoritarianism.

The process of rewriting the constitution of Chile is a seminal moment in the democratic history of the country, as it takes steps to consign the Pinochet-era constitution to the past. The SI congratulates the people of Chile and all those who have made possible the holding of this historic plebiscite.

The continued conflict between Armenia and Azerbaijan in and around Nagorno-Karabakh is deeply concerning. Upon the outbreak of the military confrontation last month, the SI called for an immediate ceasefire, convinced that only through dialogue and peaceful negotiation can this conflict be resolved. We also called from the outset for other states to refrain from further escalating the conflict by intervening or contributing militarily, whether directly or indirectly. Any third party involvement in the military confrontation is condemnable and must be stopped. We call once more for the co-chairs of the OSCE Minsk Group to persist in their efforts for meaningful negotiations, and the international community at large to play their part to bring peace and stability to the region.

The SI continues to support the two-state solution to the Middle East conflict, and reiterates its support for its member parties in Israel and Palestine who are dedicated to making this happen. The right of the Palestinian people to self-determination must continue to be defended, and the international community must firmly reject any plans that involve the expansion of settlements and the annexation of Palestinian territory, which risks permanently losing the opportunity for peace.

The security crisis in the Sahel continues to require the attention of the world, in particular in light of coup d'état in Mali and the invasion of its territory by extremists. The weakening of democracy and increased insecurity go hand in hand, and the international efforts to support peace and democracy in the region must continue.  In a regional security context the developments in Libya will play a critical role and the SI will continue to closely follow the situation there.

Escalating tensions between Greece and Turkey, taking place amid existing disputes in the Eastern Mediterranean, are of current concern. As expressed in the SI statement of 26 October, a restart of exploratory talks between Greece and Turkey, a show of the political will to resolve disputes through constructive dialogue and diplomacy, will provide a signal for the peaceful resolution of conflicts in the wider region. The SI supports the proposal for a multilateral conference on the Eastern Mediterranean to facilitate shared solutions and mutual cooperation.

Other meetings of the Presidium

Meeting of the SI Presidium and Heads of State and Government, United Nations, New York, 25 September 2014

SI Presidium at the UN: For a common strategy out of the crisis, 23 September 2011